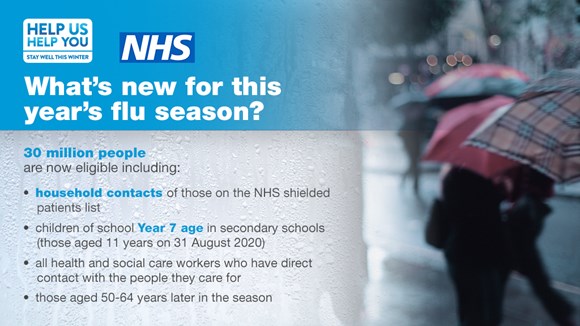 One of the region’s senior medics Dr Julie Yates, lead Consultant for Screening and Immunisation at Public Health England South West, is calling on all eligible people to get vaccinated against flu.

She said: “People might think that flu is just a cough or cold, but actually this serious illness can have devastating effects on people, including causing death in some cases.

“COVID-19 is still circulating and we expect co-circulation with flu this season. This winter, more than ever, it is important to minimise the number of people becoming unwell with flu and for people to have the flu vaccination if offered.

“More people than ever are eligible for the flu vaccination this year and I would encourage anyone invited to attend their appointment.’’

The advice comes as new research from Public Health England (PHE) suggests that the risk of death more than doubled for people who tested positive for both flu and COVID-19, compared to those with COVID-19 alone.

The research, looking at cases between January and April this year, also found that those with co-infection of the two viruses were more at risk of severe illness. Most cases of co-infection were in older people and more than half of them died.

Flu is a serious condition that kills on average 11,000 people in England each year and hospitalises many more. Adults at high risk from flu are also most at risk from COVID-19 and the free vaccine is more important than ever, to help protect the nation from a double threat this winter.

This year, the programme is being expanded to help protect people from flu and ease pressure on the NHS and urgent care services.

The health system is working to provide the free flu vaccine to 30 million people, the highest number on record:

As part of England’s biggest ever flu campaign – alongside adverts across the media and posters in key locations such as GP surgeries, pharmacies and hospitals – eligible people will receive additional direct reminders prompting them to book their appointment, supporting the hard work of local GP practices and pharmacies in driving uptake among their registered eligible patients.

To help increase uptake in the social care sector, for the first-time pharmacists will be able to vaccinate both residents and care home staff at the same time.

Last year the vaccine uptake rates in the South West were:

The unprecedented vaccine drive will be supported by a scaled-up marketing campaign across TV, radio and digital advertising. The ‘Just’ The Flu campaign, launching in early October, will reinforce the seriousness of flu, urge people to re-evaluate their own risk to the virus and remind people that vaccination is the best protection for themselves and those around them.