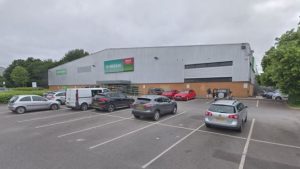 An emergency field hospital for coronavirus patients will be built at a former Homebase store – instead of an arena – because transmission rates are “lower than expected”.

One of seven Nightingale Hospitals will be built in Exeter for patients from Devon, Cornwall, Dorset and Somerset.

The NHS facility was slated to be built in the Westpoint exhibition centre, but will now be at the much smaller site.

The move “would be a better use of resources”, the NHS said.

“The lower than expected COVID-19 transmission rates in the south west combined with updated modelling of care needs also shows that a smaller site would be a better use of resources,” it said.

It added that it explored alternative sites after considering the “value which Westpoint brings to the community north of Exeter, and the disruption it could cause to its everyday operations.”

The new site will also be available to the NHS for longer than the arena would have been, the NHS said.

‘Best we can’
Dr Michael Marsh, regional medical director for the NHS in the south west, said: “Westpoint have been nothing less than exemplary and were the first to heed the call.

“They understand why we have made the decision and support us in doing the best we can for patients.”

The Army is going to help build the new hospital with a plan to open in late May.

The other NHS Nightingale facilities are in Bristol, Birmingham, Harrogate, London, Manchester and Sunderland.

In total they will provide more than 3,600 additional beds with ventilators that can help treat critically ill patients.