Call for UK-wide clap for key workers on NHS anniversary 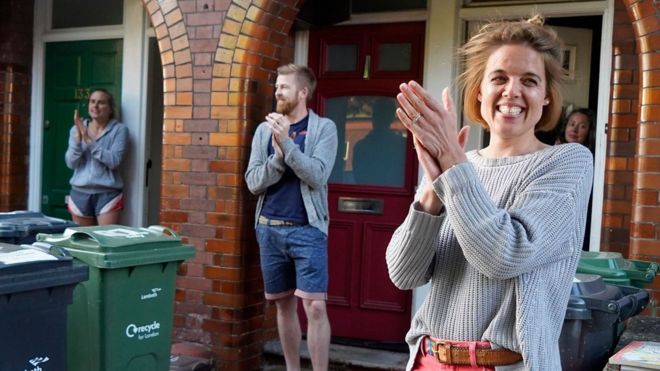 People are being encouraged to celebrate the NHS’s 72nd birthday and thank key workers for their support during the coronavirus pandemic with a nationwide clap next month.

NHS England boss Sir Simon Stevens and the Archbishop of Canterbury Justin Welby are among the influential figures supporting the initiative.

The initiative would make 5 July an official day to pay tribute.

Dutch-born Londoner Ms Plas was credited with starting the nationwide applause for NHS staff and key workers, which saw millions of people clapping at their windows and on their doorsteps on Thursday evenings in lockdown.

In a letter, compiled by the Together coalition, public figures including Sir Simon and the Most Reverend Justin Welby, the leader of the Church of England, voiced their support.

It said: “We all owe a debt of gratitude to the nurses, doctors, physios, porters, cleaners, and countless others who have delivered for patients and their families along with all those in the care sector.

“But we are also hugely grateful to the shop workers, transport staff, delivery drivers, teachers, refuse collectors, farmers, armed service personnel and other key workers who have kept the country going.”

Sir Simon added he wanted to thank the public, in particular, whose support had meant so much – “from the children who put rainbows and NHS signs in their windows, to all those who saved lives by staying at home to slow the spread of this terrible virus”.

Making a Christmas bubble with friends and family

COVID-19: What you need to know when visiting a care home